Showing posts from December, 2016
Show All

Celebration of Season of Joy! 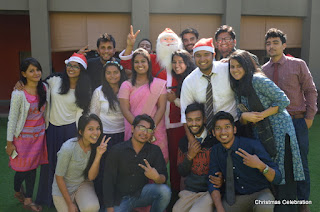 Christmas celebration was conducted at CIM Amphitheatre on 13 December 2016.The entire venue was decorated with boughs of holly, it was made very colorful and also a replication of traditional Christmas tree was a center of attraction. It began at 12.30 p.m. It kicked off with a small mime that depicted the power of love and also showcased the real meaning of Christmas which is spreading love, joy and peace. Christites also took an opportunity to offer thanksgiving to people who have rendered support to them and helped them in their journey. This was then followed by a performance by the ‘CIM dance team’ on a few Christmas carols which lit up the Christmassy mood. There was a competition held between the first years and second years with a team of five members each wherein they had to throw white balls in each other’s territory and whichever zone had the least amount of white balls won the game, the winners of this game were the second years. ‘CIM Choir’ added to the feeling of Chr
Post a Comment
Read more
More posts