Showing posts from March, 2018
Show All

On 3rd and 4th March 2018, faculty members from the Christ Institute of Management, Lavasa conducted a two-day career counselling workshop in Indore, Madhya Pradesh. The workshop titled “Game of Careers” has in the past received many accolades when conducted in the cities of Pune, Mumbai and Bangalore, and the response from Indore was equally as impressive. The Game of Careers workshop is organised by expert academic and industry members of the Christ Institute of Management, Lavasa with the aim to orient youth seeking careers in management on principles of modern management and business analytics. The workshop addresses the changing needs of organisations and expectations from management in the present and future industry scenario. Christ Institute of Management, Lavasa is an Institute for enhanced learning with a focus on experiential and pragmatic teaching of modern management principles, where academics and industry professionals come together to engage young m
1 comment
Read more 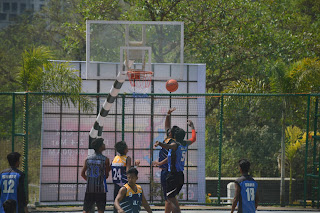 CHRIST INSTITUTE OF MANAGEMENT, LAVASA CRESCEDENT SPORTS FEST A MASSIVE HIT The recently held Crescedent Sports Fest at Christ Institute of Management, Lavasa brought with a lot of adrenaline pumped competition and excitement as teams from across the nation including corporates, colleges and clubs participated. Conducted between 2 nd and 4 th March, the second edition of the Sports Fest brought with it immense excitement in basketball and football, from participants and crowds alike. This year, 12 teams competed for the coveted football trophy, and five teams battled it out for the basketball championships, all uniting under the banner of Crescedent 2018 to celebrate the spirit of sports. While all matches were intense and competitive, it was the nail-biting finals of basketball was held on between teams Accenture and Hawks that grabbed everyone’s attention. Each team played its best to the last second, but in the end it was the Hawks that emerged victorious as th
Post a Comment
Read more
More posts