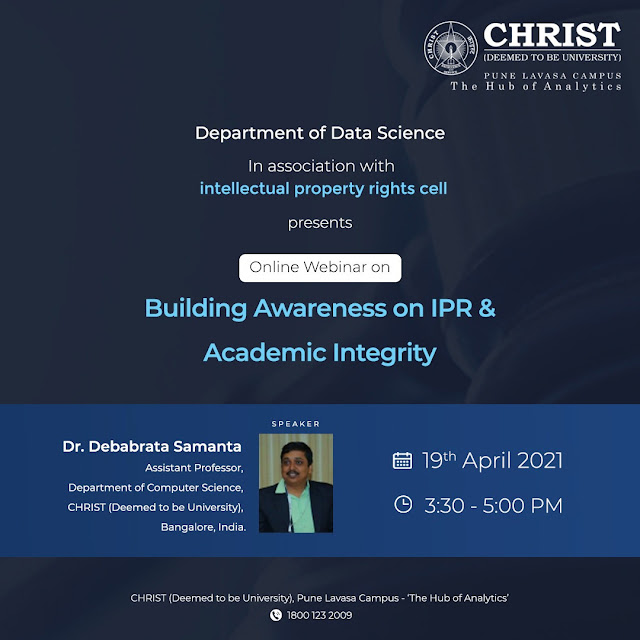 Prof Vasantakumar Megalamani began the webinar with an introduction to the resource person, Dr Debabrata Samanta. He briefed about his experience and contribution towards the role of consultancy, publications and patents.

Dr Debabrata Samanta started the talk by talking about the various benefits of IPR,

He explained what is an IPR (Intellectual Property Right). He explained that IPR is related to patent, copyright, industrial design, trade secrets, trademarks and layout design. IPR is an intangible asset that deals with creations of the mind, inventions and literary and artistic works. He mentioned the various IPR offices in India for patents and designs. He gave an example of how companies such as Apple, Nestle, Mercedes etc have patented their logo.

He talked about the various kinds of patents, such as the Utility patent, Design patent,  and plant patent. He discussed what can be patentable such as the process, machine, manufacture, composition of matter, new and valuable improvement. He also mentioned what is considered not patentable such as discoveries, ideas, law,  physical phenomena and abstract ideas.

He briefed everyone about the various steps that are involved in the process of patent registration. He briefly explained each of the steps, including File Preparation, File  Review, Draft Application, Examination Request.

He continued to explain the idea of copyright that it creates in the author an exclusive idea to produce, reproduce, publish and perform his work in all ways known and possible. He said that works that can be copyrighted include Sound Recording, Cinematography, Literary Work, Music, drama art etc. He talked about the process of copyright, namely, Review, Research/Development Work Report, Design Report,  Survey, Class Note, Pre-publication Report.

He moved on to talk about the other kinds of IPR such as traditional design, IC layout designs, plant variety, biotechnology inventions, traditional knowledge, geographical indications. He also mentioned the commercial databases such as total patent, Database, Orbit, Derwent Innovation, WIPS Global, Patseer, Ambercite, Patsnap. He discussed the different ways to search published patents such as Google patents,  WIPO, the essential patent documents and forms to be submitted. 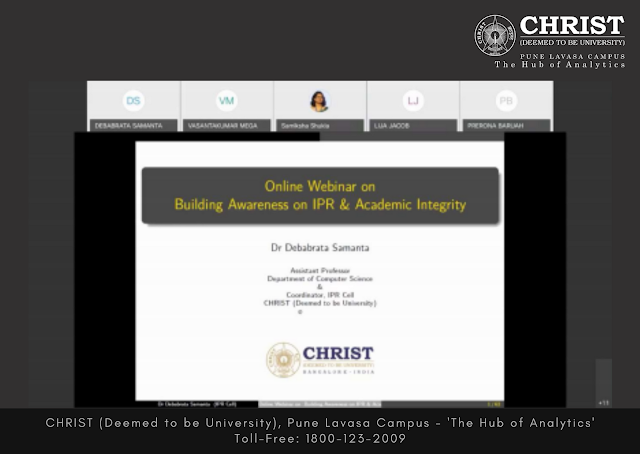 Dr Samiksha Shukla, HoD of the Department of Data Science, CHRIST (Deemed to be University), Pune Lavasa Campus, thanked and acknowledged the resource person for his in-depth and insightful talk on the topic showing the various platforms that can be reached and bring about the innovative ideas which can help to process the patent work. The session concluded with Prof. Akhil M Nair extending the vote of thanks to the resource person, all panellists and the participants for their active involvement throughout the seminar.

- August 18, 2020
Elixir is an online Freshers event with the main aim to make the juniors more familiar to the classic college events and a great way to start a communication with their seniors. Elixir meaning something magical, is the way we want our juniors to taste the experience of this University. CHRIST (Deemed to be University), Pune Lavasa Campus has a positive environment to bring out people to nurture through every talent they wish for. It builds the bridge between the seniors and juniors to collectively bring out their passion. The event began with an address by our Director and Dean, Dr. Fr. Jossy George who addressed the faculty and students about this programme and also released the Department’s Official Magazine The Realm written and edited by the students themselves. It was a 1-day event but followed quite a many rounds and screening to reach the final day finalists. The participants got to know about our event through our official social media handle of Commerce and Management with t
Read more 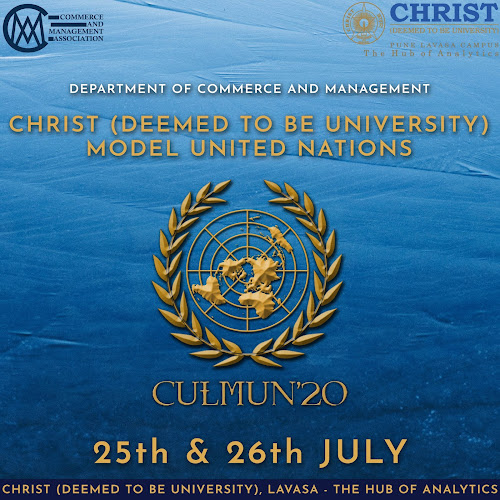 An MUN is a stimulating environment created for students to Model the happenings of the United Nations. This stimulation is created by replicating countries and their committees. Christ(Deemed to be University) Lavasa strives to create a holistic environment to nurture a student’s growth so CULMUN20 was yet another stepping stone in that path. Christ University Lavasa Model United Nations was a 2 day conference that challenged the participating delegates in vast areas of the workings of the world. Given the current time, the planned physical event was shifted to virtual reality. The participating delegates came from every state of India and making the conference a national level conference! Day 1 The first day saw a multitude of debates, ice breaking sessions and it all began with the Opening Ceremony. During the ceremony, our Director and Dean , Fr. Jossy George spoke about how integral events like these are for a student’s growth and development. The ceremony was conclu
Read more